When Mountains are in Your Way… 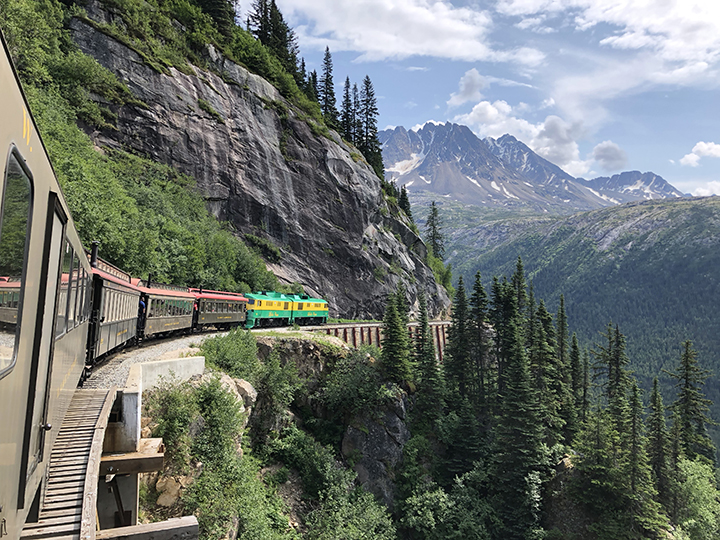 A couple of weeks ago, I took a vacation and went to the inside passage in Southeast Alaska, which to me is one of the most beautiful places in the US. This was my second visit to that part of the state – the first having been 5 years earlier.

I did a lot of awesome things on this trip – to me there is nothing more refreshing for the spirit than being in the mountains. But of all the things I saw and did – one was my absolute favorite: a 3.5 hour train on the White Pass Yukon Route train that went from Skagway, Alaska to White Pass, Canada and back.

Describing this journey in words or how beautiful it is doesn’t do it justice. Neither do photos really, even ones as pastoral as the one posted in this blog entry, which I took on the way down back to Skagway. (Thanks iPhone X.) This is truly one of those things that you need to experience for yourself to fully appreciate the majesty of.

While I was taking in these amazing views I was experiencing, I started thinking about how difficult it must have been to build a railway like this at any point, never mind in 1898 where there was so much less “stuff” than we have today. There are some pretty tough obstacles to building in untamed wilderness such as this – not just the height of the climb and the narrowness of the passages that you needed to tackle. The 30+ foot snow drifts that these mountains accumulate and Alaska’s brutally cold winters are no joke, either. The train’s conductor pointed out a number of things throughout the trip, and one of them was that as soon as they began construction, workers encountered a huge, unexpected obstacle: they were not able to use much of Alaska’s native timber for the job because it splintered too easily.

Can you imagine needing wood to do a job – and being literally surrounded by it – yet…you cannot use any of it?? That had to be discouraging.

According to the conductor (and the handy guide book they give you when you leave) this railway took almost 2 years to build. At no point were there less than 1,000 men working on it – at many points there were almost 2,000. There is 110 miles of track, some of it on cliffs with harrowing turns. There are 2 large tunnels on the line as well which are blasted out of solid, mountain rock where when you pass through them today, you cannot see your own hand in front of your face (literally). She also explained that a 16 or so mile span, which was in a particularly challenging section, was built in the dead of winter, with temperatures as low as 60 below and with heavy snowfall on a daily basis. Yikes.

Who in their right mind would set out to build something like this? And who would be insane enough to do the actual work of building this thing under these conditions?

People with vision. People who saw possibilities against unprecedented odds. People who shared a dream AND the hardship that it took to make that dream a reality…a reality that changed history. The sense of accomplishment these men must have felt upon completing this railway had to have been amazing.

The story of this train’s construction is something that so many of us can relate to, isn’t it? How many times have you had a goal or a dream that seems near impossible to accomplish? Even when you make well laid out plans…you can encounter obstacles along the way – some of them unexpected. That can make your goal seem so difficult to reach – maybe even impossible – which can be discouraging to say the least.

Those obstacles are your mountains in the figurative sense. Since we all know that you cannot move mountains, you then have to make a choice – do you simply give up and go home? Or do you carve a path around those suckers and get to the other side anyway?

I’ll give you a hint: getting to the other side is going to feel pretty great. Much better than the regret of giving up, which inevitably everyone experiences when you know you have given up an opportunity to achieve something great.

Go carve your path. It’s worth it.

Oh, and when you get to the other side, take a picture – which I’m sure the men who built this incredible example of human persistence would have done if, say, smartphones were a thing in 1900. 😉